This is a test...enjoy the stream before it disappears !

A suspicious woman stirs up trouble among the members of her family.

Email ThisBlogThis!Share to TwitterShare to FacebookShare to Pinterest
Posted by Unknown at 1:21 PM 0 comments

CONTENT ADVISORY (LANGUAGE)
Try to put aside your Bollywood dreams for an hour. Just watch a doc on LINK TV :

"Nearly 200,000 farmers have committed suicide in India over the last 10 years. But the mainstream media hardly reflects this. Nero's Guests is a story about India's agrarian crisis and the growing inequality seen through the work of the Rural Affairs Editor of Hindu newspaper, P. Sainath.


Through sustained coverage of the farm crisis, Sainath and his colleagues created the national agenda, compelling a government in denial to take notice and act.


Through his writings and lectures, Sainath makes us confront the India we don't want to see, and provokes us to think about who "Nero's Guests" are in today's world."

Please share if you are moved or enlightened as I was.

It takes decades for some pop music to gain lasting
relevance. Depeche Mode's '80s music totally fits the bill
here as it finds itself elevated into a classic by Dior.

This has nothing to do with Poona/Pune except that I witnessed Norah's Dad Maestro Ravi Shankar perform in Poona once upon a long, long time ago. That's stretching the connection but hey....I wanted to save this video and decided to use my latent blogger capabilities, so you win. You get the most up-to-date video clip plus you get to see a photo I took in Las Vegas of someone who looks a lot like Norah. Hope you understand spoken Italian, which you won't need anyway, since she sings in her normal English language.....Ciao !

This is a test. Might as well make it interesting and throw in a cool
mix track and the original DJ Dogg....

Email ThisBlogThis!Share to TwitterShare to FacebookShare to Pinterest
Posted by Unknown at 8:02 PM 0 comments

A bit old by today's standards.....but I just had to share it here, where it belongs....
Email ThisBlogThis!Share to TwitterShare to FacebookShare to Pinterest
Posted by Unknown at 5:45 PM 0 comments Labels: kolaveri+song Pune+police traffic+song

Fragments of a person's mind, ten years after the tragedy......Glenn Losack
was in NYC http://www.flickr.com/photos/glosackmd/6118661918/in/photostream
while I was in Houston, Texas.

The picture below is from 1996, the last time I saw the Twin Towers. 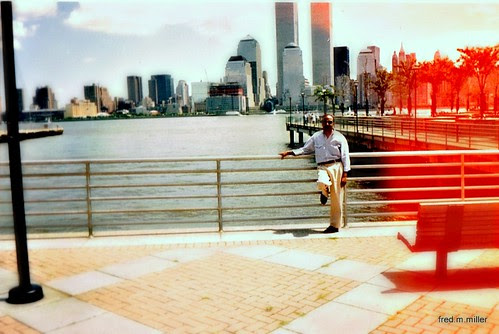 I cannot share anything new with you today about my reflections of that place on that day.
It was before cellphone cams became the norm, and so I have nothing to add in that
respect either. All I can say is that I can never watch any NYC scene ever again without
some discomfort, because I invariably experience pain deep inside. Even some of my favorite
old Hollywood NYC scenes have taken on a new, tainted dimension as I get flashbacks, in a
manner of speaking.

Luckily, Glenn has been biding his time and finally finished his dedication for all of us to see,
the two 9-11 videos below. All the photos, lyrics and music performances on all instruments
are Copyrighted and courtesy of Glenn Losack, MD

"Dedicated to the 10th year anniversary of 9-11-2001 and to the brave soldiers who
die/d for our liberty protecting our freedom of speech and right to protest among
other freedoms we enjoy."
~ Glenn Losack

This has some strange meaning to me in more ways than just the immediate desperate
message to humanity in the video. Angelina Jolie, Demi Moore, Salma Hayek, Jessica
Alba and countless other celebrities have all visited poverty-stricken countries and
been moved to join the crusade to bring attention to the dire conditions children face
in poorer nations.

Today's UNICEF post on Facebook featured Woody Allen's ex-wife Mia Farrow
who has been garnering attention for her untiring work in the Horn of Africa. Today
I am pleased beyond measure with her efforts, even as I remember with mixed emotions
the day I met her. What follows is a highly condensed version of that day.

Back in Sept.'94 as a Limousine Driver I found myself on the premises of Mia Farrow's
Connecticut farmhouse just after her divorce with Woody Allen came through. I was
responsible for transporting the Marquesa de Varela

the Editor and the crew of Hello magazine European edition to interview Ms. Farrow in
Connecticut. My mind was a mess. First day on the job with a new Limo company and I was
going to meet a legend !

A couple of hours after the drive from NYC I naturally got as curious as the average
star-struck person and decided to try and get a peek of Ms. Farrow. I walked to the
front door, knocked, and was greeted with curiosity by a little boy who was obviously
Woody's son. It was like someone had taken Woody's nose and glasses and stuck them
on the kid, like one of those Groucho Marx masks. He just stood and stared and I guess
he didn't speak much yet. Well, the babysitter directed me to an outhouse kind of
residence where I helped myself as I began to feel like a real servant in the 'Servants'
Quarters'.

As I kept out of  listening distance, the interview continued outdoors on the banks
of Ms. Farrow's own private lake where they were barbecuing hamburgers and
hot dogs that survived the transition to a new humongous refrigerator that was hooked
up while I was there. The amount of wasted food that was being thrown out was amazing
but somewhat understandable given the presence of 12 kids. No, Soon-Yi was not there
anymore. She left with Woody when the farmhouse was awarded to Mia as part of the
divorce settlement.  As I got hungrier by the minute at the aroma of all the grilling,
I also found myself taking a disdain towards my client who I later discovered was known
as the 'Nutty Marchesa' in Europe. She was a full-fledged Marquessa and her royal
blood and cash connections are what landed her this interview so soon after the divorce
(I believe). Almost the entire trip from NYC and back consisted of the Marchesa behaving like,
well, a European Marchesa with no time for small talk with small people. Fine, that was
acceptable in my situation. Limo drivers should be seen, and not heard, as I was to learn that
day.
But my roots of Indian hospitality towards all, regardless of one's station in life were shaken.
I bristled at the total disregard of my presence while they gorged themselves but was not
even offered a glass of water. While I was driving, the Marchesa demanded I first dial
Mary Pierce at the US Tennis Open, and then make contact with the late Natasha Richardson
(who had just married Liam Neeson), and while I was struggling with the international codes
with one hand on the wheel she very loudly remarked so I could hear, "Not very professional ! "

During the final minutes of this ongoing adventure the heat and humidity gave way to
a tempestuous thunderstorm akin to the best Monsoon I have ever seen as an Indian. We set
out back to NYC, but only after I spent 15 minutes holding an over-sized umbrella over Ms.
Farrow, who seemed immune to the downpour in her Mac and gumboots. She was completely
drenched as she chatted with the Marchesa, and I was soaked to the skin on the one side
that wasn't protected by the umbrella. It took 3 hours for me to dry out as we drove back to
the Intercontinental Hotel in NYC.

So the strange part I mentioned before is.... ? It just struck me as ironic that Mia should be
struggling to help feed children across the globe all these years after she threw away (in true
American style) humongous amounts of food along with her old fridge.